Why Australia’s the sexiest country in the world

My first introduction to the romance genre was through Harlequin Presents novels, so not only did I learn a whole lot about what boys and girls do when they like each other, but I also got to explore new countries for only a few dollars a month.

That’s how I realized Australia’s the sexiest country in the world.

Lots of the novels were set in London and Australia—places where they called their friends “mate” and lived in flats (which for years I pictured as apartments with lower ceilings).

Not the grown-up life I wanted to have.

Australians, on the other time, chased each other through the Outback. They frolicked in the surf. They occasionally encountered animals so bizarre that only funny-sounding words could describe them: kookaburra, wombat, kangaroo.

Okay, maybe there weren’t wombats and kookaburras. I do recall some storylines with kangaroos, though.

And the clothes on the covers! I remember reading a novel in my uncle’s living room when I was about thirteen. He stared at the cover for a while before asking me, “Why is the man dressed from head to toe in khaki but the woman’s only wearing a bikini?”

Giving him my best grown-ups-are-sooo-dumb eye roll, I schooled him. “Because that’s what they wear in Australia, Uncle Rick.”

Even though Australia has been at the top of my travel wish list for two decades, I’ve only been there through Harlequin. This month I’ll be taking another trip there, courtesy of one of my favorite Harlequin authors: Sarah Mayberry.

No, she’s not sending me a round-trip ticket. (You’re not, right, Sarah?) 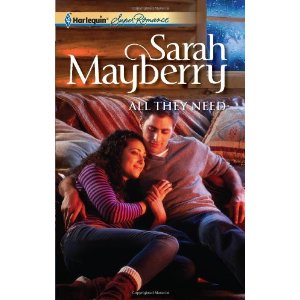 Assuming she’s not, she’s done something nearly as good. She’s written another book for me to read. I’ve heard great things about All They Need, but there are only two things I really needed to know before putting it on my wish list: it’s by Sarah Mayberry and it’s set in Australia.

I may read it while wearing my bikini. Because that’s how an Australian would read it.

What place have you read about that seems magical? Have you been able to visit it in real life?

What do you think? Cancel reply