Winner of the Kristan Higgins giveaway! 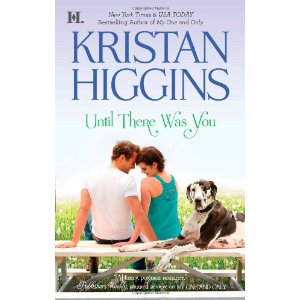 Thanks so much to everyone who commented on my interview with Kristan Higgins, and a huge thank you to Kristan for giving away a copy of Until There Was You.

Daco, I’ve sent you an email.

Everyone, this week romantic suspense author Brenda Novak is giving away a copy of a book I absolutely loved, In Close. Leave a comment for a chance to win it! 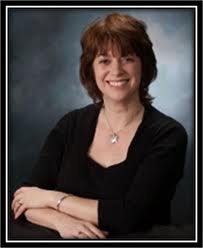 While I was preparing for this interview, I cruised on over to Kristan’s website and did some research into her life. I clicked on the link to her blog and ended up spending TWO HOURS reading her posts.

I’ve never spent that long on anyone’s blog before – not even mine.

Kristan’s novels have the same effect on me. They suck me in and don’t let go until I’ve sobbed my way through the happily-ever-after. If you like romance featuring strong, quirky families, lots of dogs and even more smooching, Kristan Higgins is your gal.

Thanks for taking the time to answer my questions, Kristan, and for giving away a copy of your latest release, UNTIL THERE WAS YOU!

1. One of countless things I love about your books is the strong sense of community you build. It makes me think that living in a small town must kick city-life’s ass. Is there anything bad about life in a small town (I ask this as someone who’s moving from London to the vast emptiness of the northern Netherlands, so please say no)? How do your communities challenge your characters and help them grow?

Anything bad about a small town? Er, um, of course not! Small town life is perfect! Especially if you love people knowing you perhaps a bit better than  you’d like, eating at the same restaurant over and over and over, being viewed as exactly the same person you were when you were thirteen and threw up in math class, no, there’s not one drawback!

I think life in a small town challenges my characters to be more than they were back when they were puking in Mr. Eddy’s class. But there’s an intimacy and caring that’s very evident in a small town; a person gets hurt, and there’s a spaghetti supper to raise money for medical costs.

I do think that’s true in big cities, too; cities are nothing more than a bunch of different neighborhoods, but there’s something about a small town that invites personal interaction.

2. Most of your novels are written in the first person from the heroine’s point of view, but UNTIL THERE WAS YOU is told in third person and lets us see things from the hero’s perspective too. What made you decide to switch things up for this one?

END_OF_DOCUMENT_TOKEN_TO_BE_REPLACED

Review: My One and Only by Kristan Higgins

A tender, funny novel about divorce? Only Kristan Higgins could pull it off. 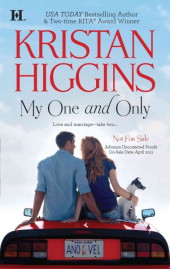 Harper James thinks she know what it takes to make a marriage work. After all, as a divorce attorney she’s seen plenty of evidence of what makes marriages fail; plus, her own brief but heart-shattering experience of marriage taught her that practicality, not passion, is the secret to success. She believes:

“Comfort, companionship and realistic expectations…they didn’t sound nearly as glam as undying passion, but they were worth a lot more than most people believed.”

And she thinks she’s found the man who’s her ideal mate—or, he will be, once he makes several changes in his life, like cutting off his rat-tail and getting a second job. Fortunately, Harper’s a very organized woman, so she’s made him a list of things he needs to do before they get married—which she hands to him when she proposes.

If you’re not familiar with Kristan Higgins’ novels, there are several things you’re guaranteed: 1) a kind, funny, mostly lovable heroine; 2) a wonderful but realistically flawed hero; 3) secondary characters who are so well drawn they never feel secondary; and 4) an adorable pet. My One and Only has all those elements, but there were times when the hero and heroine irked me and didn’t seem as realistic as I wanted them to be.

Because the novel’s written in first person exclusively from the heroine’s point of view, I really have to feel connected to the heroine in order to love the story. I also need to get enough insight through the heroine’s eyes of how the hero is feeling because I’m never once let into his head. This is where I had some issues.

END_OF_DOCUMENT_TOKEN_TO_BE_REPLACED

All I Ever Wanted by Kristan Higgins

If you’re looking for a sweet, tender contemporary romance, All I Ever Wanted is a great one.

On Callie’s thirtieth birthday, the man she’s been in love with for years tells her he’s seeing someone else. Heartbroken and lonely, Callie decides to throw herself on the dating market and hope to find someone who returns her love.

Callie’s sweetly optimistic about love, even though all the people around her have been burned by it. The novel’s all about her search for a happily-ever-after with her soulmate, and other considerations in her life (like her quirky family and stress at work) are secondary considerations.

This is usually the kind of story that is too saccharine sweet for me, but pain from Callie’s past underscores her positive attitude, making her a more complex character than she first seems.

The story is told in first person from Callie’s point of view, and her peppy voice makes for delightful reading. Take, for example, this scene, when she makes an appointment with the new veterinarian who—rumor has it—is hot. She finds the waiting room packed with single women and their pets:

“There was Jenna Sykes, another old schoolmate, who gave me a confident smile. A golden doodle puppy snoozed on her shoulder like a baby. Okay, that would be hard to beat. A puppy was an unfair advantage in man-seeking, especially if the man was a vet. I wondered if that was Jenna’s strategy. Not a bad idea when I thought of all the money we women invested to get a man—haircuts and color, makeup and moisturizers, minimizers, maximizers, lingerie, clothes, shoes, waxes…crikey! And all we asked in return was that they be semi-clean. At least Jenna’s investment would love her back.”

Unfortunately for Callie, the new vet turns out to be Ian McFarland, who witnessed one of her lowest moments. Just after she’d found out the love of her life was seeing someone else, she’d had to go to the DMV to get her license renewed. Ian was in line behind her as she sobbed and spilled her guts to her sister over the phone. Ian hadn’t exactly been sympathetic to her emotional breakdown.

Ian is the complete opposite of Callie. She describes him as a dick, and that’s basically how he comes across at first. But then he hires her to do some PR for him, and she starts to appreciate Ian for the loyal, tender-hearted man he is.

It takes awhile for things to heat up between Ian and Callie, so anyone who wants their romance to start with a bang may find this novel slow-moving. But the love between Ian and Callie grows organically, and by the time they start to fall in love the reader has spent around 170 pages getting to know Callie. Because of that, it’s like watching your best friend fall in love.

Since the whole story is in Callie’s point of view, it also takes awhile to warm to Ian.  At first, he’s taciturn and rude, but as the reader sees him slowly and cautiously open himself up to Callie, it’s impossible not to fall a little in love with him. He’s got deeply painful reasons for being the way he is, and Callie is the only one who can heal him.

In true Kristan Higgins style, there’s a cast of colorful, quirky characters, including Callie’s mother the mortician and her one-legged grandfather Noah.

I had so much fun reading All I Ever Wanted that I found myself grinning like a fool throughout it—that is, until I cried. Just a little, but enough to know that the characters had sucked me into their world and made me feel like one of them.

(First posted on The Season)